This tiny, oddly-shaped hut has been built as a retreat for a client in Czech Republic by the design studio, Uhlik Architekti. The owner of the retreat hired Uhlik Architekti to create a modern hideaway in the countryside on his behalf. The space is intended to serve as a place of relaxation which the owner can escape to after his demanding day job in Prague. 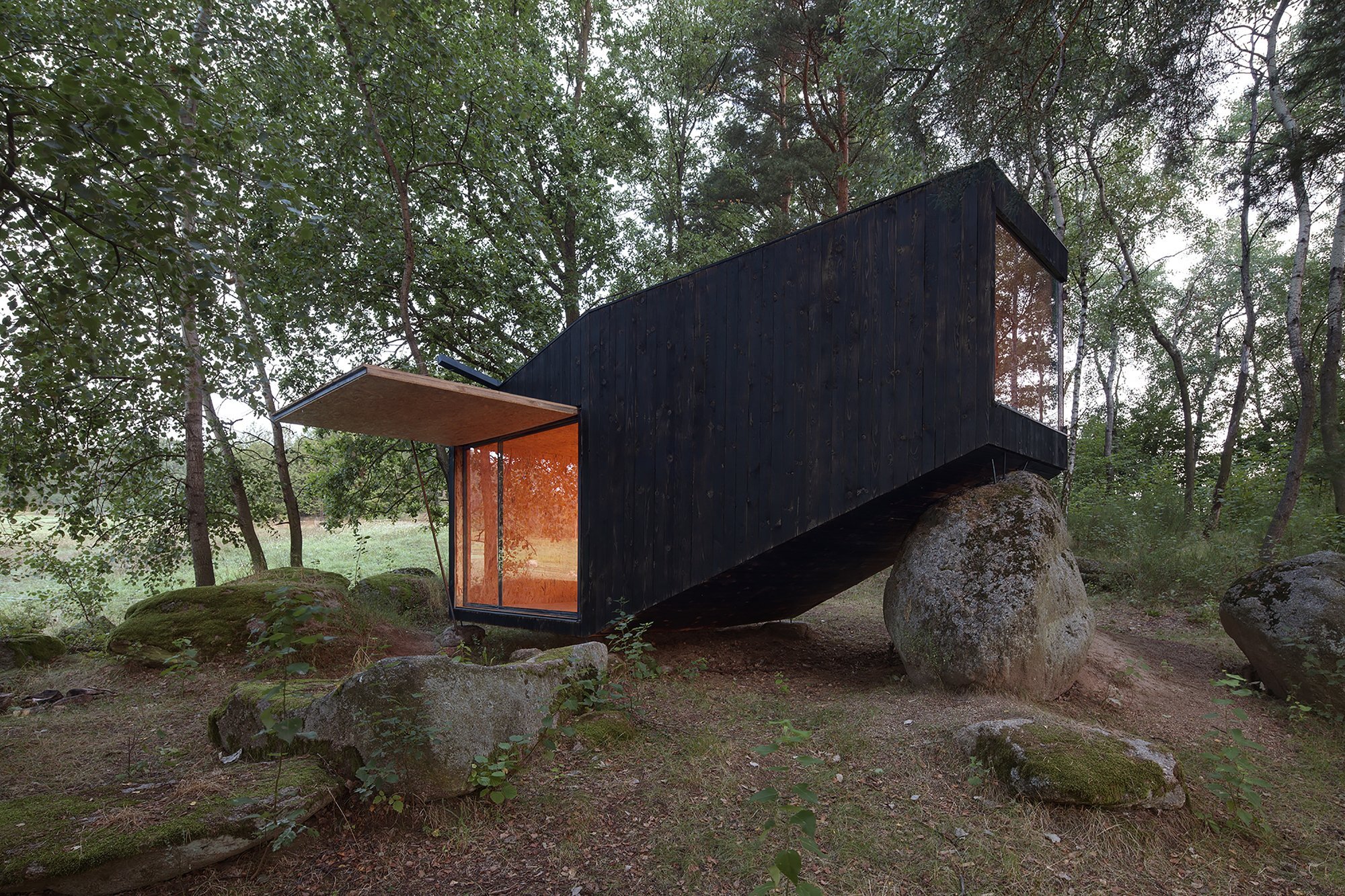 Referred to as “The Forest Retreat”, the structure is located in an area between Central and South Bohemia. The client is originally from the region and often visits the site as it is evocative of his childhood. The tiny forest retreat is set in a remote part of the woods, surrounded by fields, meadows and boulders. 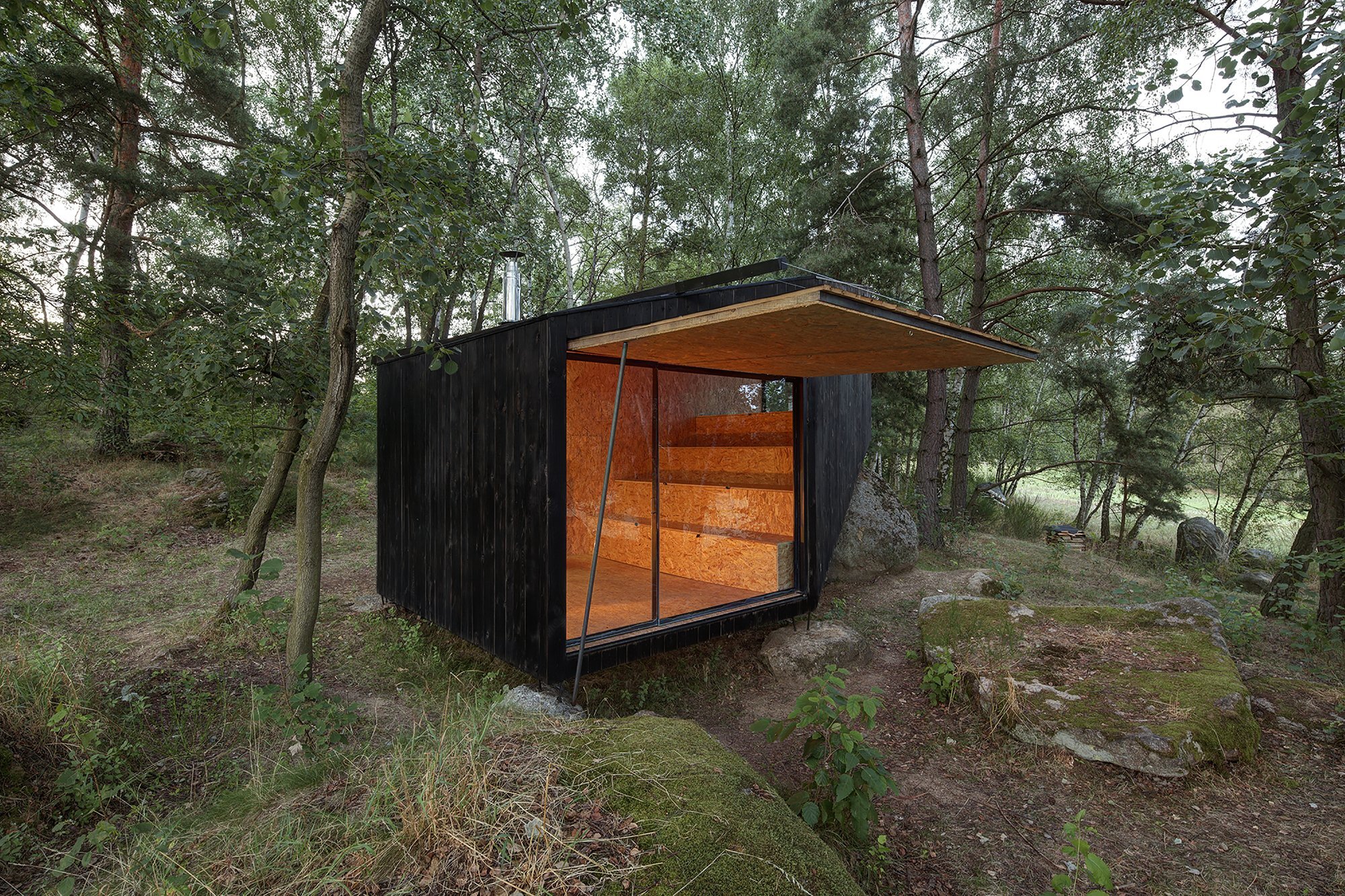 At first the architects were a little hesitant, but the unusual landscape and the clients own history and drive persuaded them to see it through. Materials for the structure were sourced from nearby forests and construction was carried out by local craftsmen. 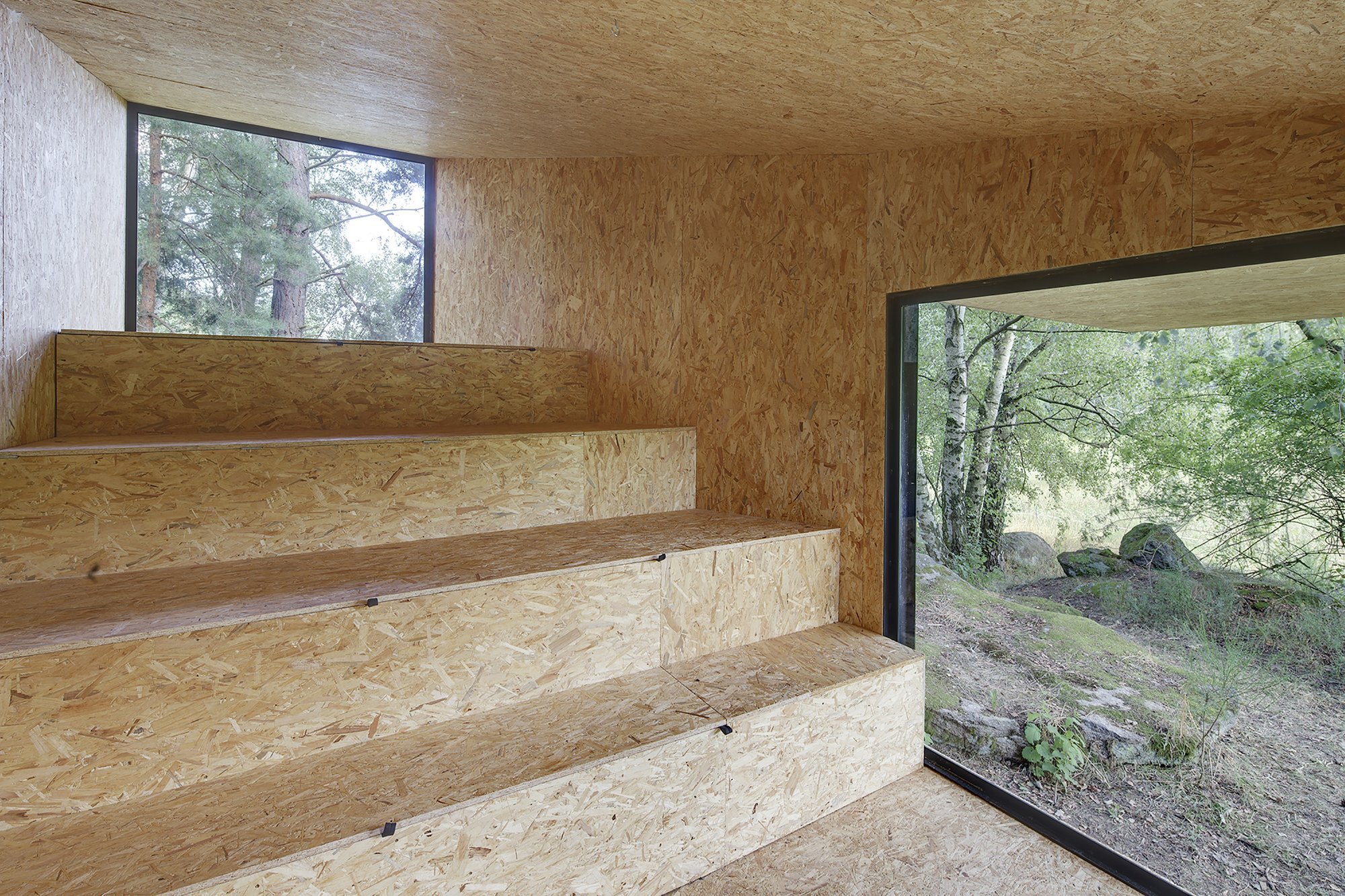 Uhlik Architekti produced a compact and odd volume (with an area of just 16 square meters, or 172 square feet) which made use of the surrounding boulders – one end of the structure rests freely on a large boulder. The exterior cladding is composed of charred wood, a technique often used in traditional Japanese construction. 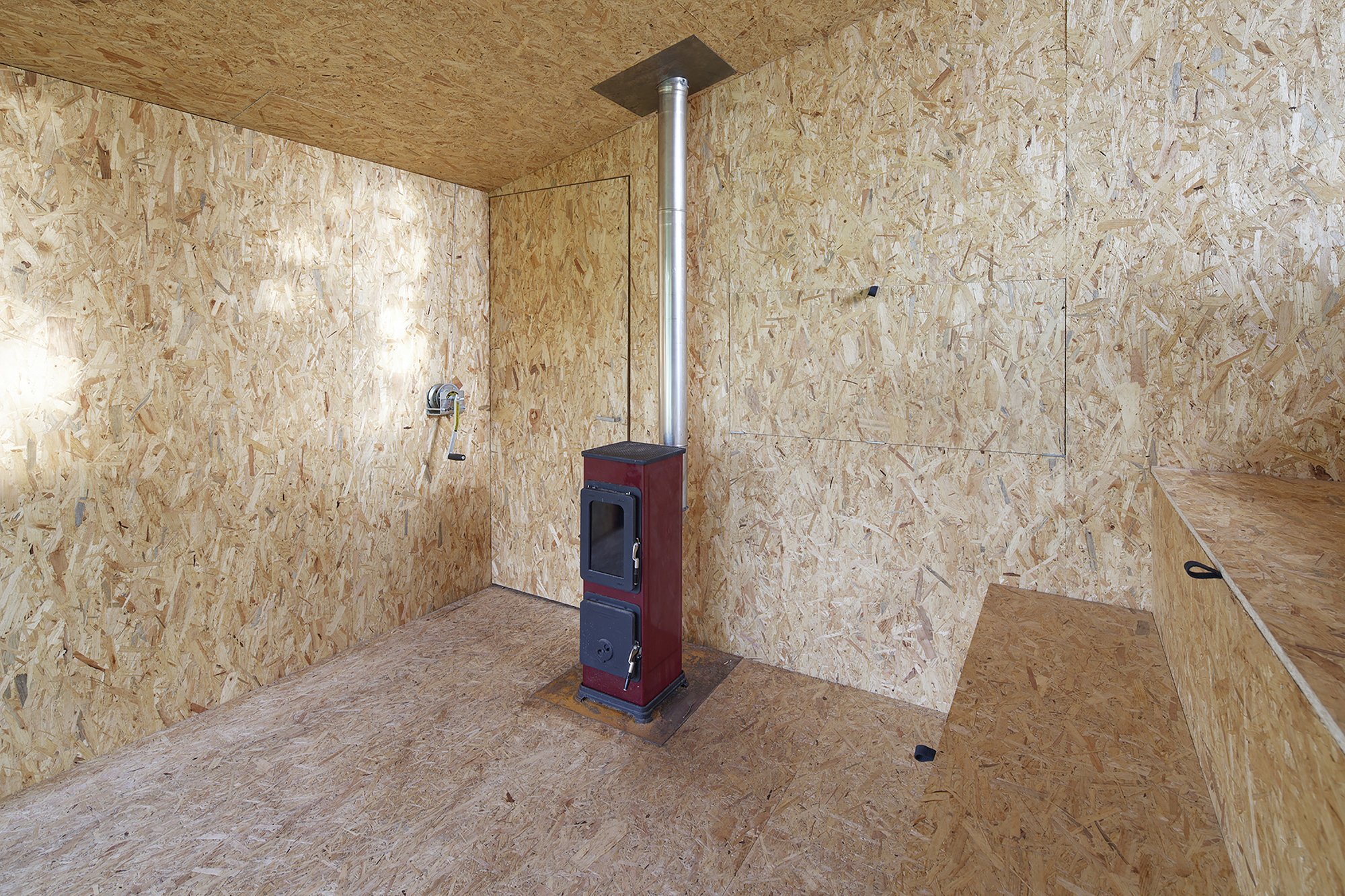 The forest retreat is approximately 3.1-by-5.8 meters (10-by-19 feet), and features a single open plan space with a tiered rear end that gradually rises towards a window opening at the peak of the building. The rear window provides canopy views of the trees, while the “steps” leading up to it serve as a space for sitting, sleeping or resting. The underside of the steps also provide a space for storage. 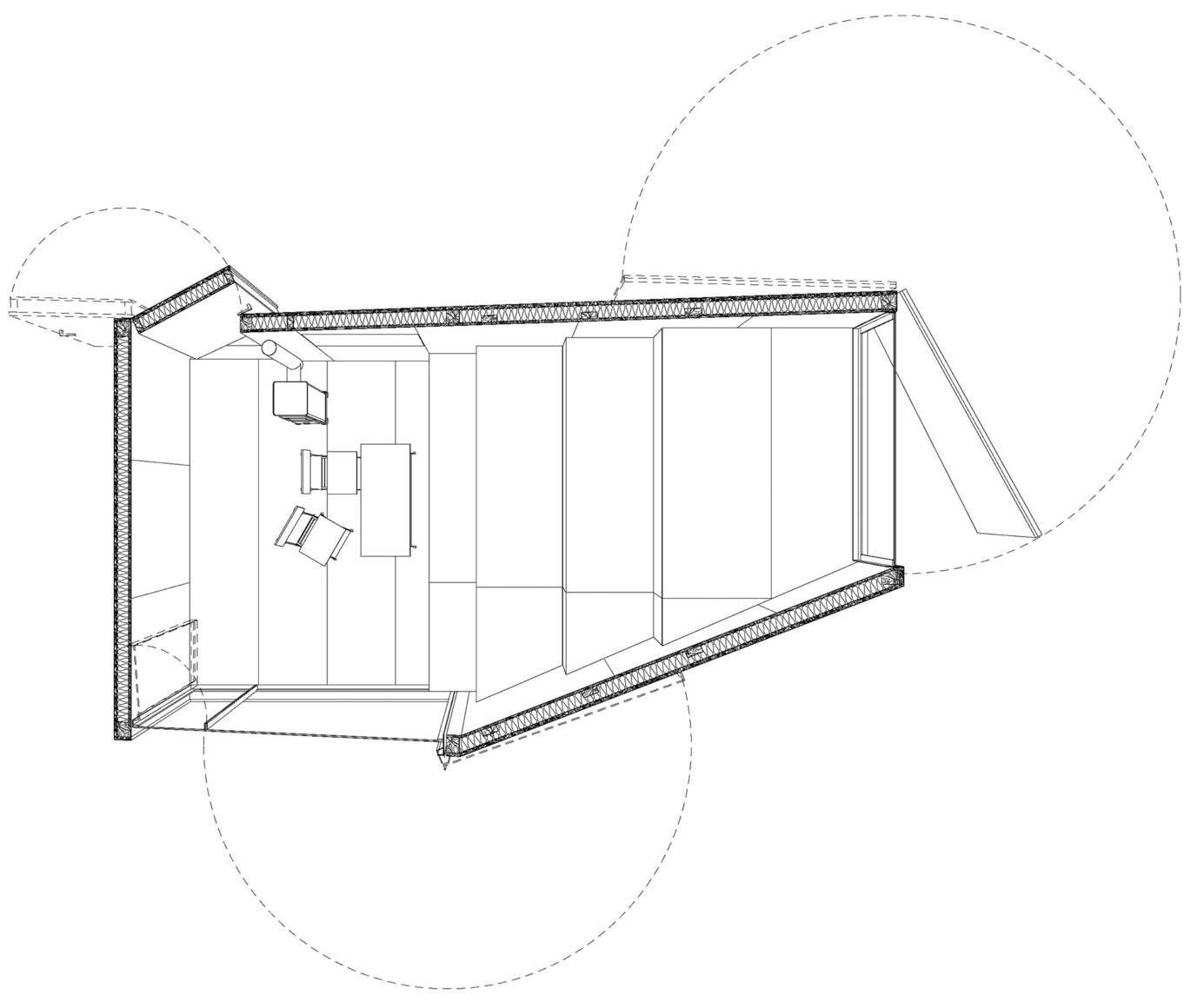 The front of the retreat features a large floor-to-ceiling window/patio door. All of the window openings have be “closed up” helping to secure the structure when it’s not in use. There’s also a wood-burning stove to provide heat for the occupants during use. The retreat was envisioned by the architects as a multifunctional space suitable for small events, performances and mediation.

For more retreats check out Scott Newkirks tiny off-grid cabin in the woods of Yulan, New York. Or the Window House, a small ocean-front retreat in Kanagawa, Japan. See all retreats.

A Multifunctional Barn in The Netherlands by Onix