The Tower House can be found perched atop a steep hill in Portland, Oregon. Designed by Benjamin Waechter Architects, the house has a small footprint and is built up instead of out; usually a much more cost effective way to build, particularly on sloped sites. 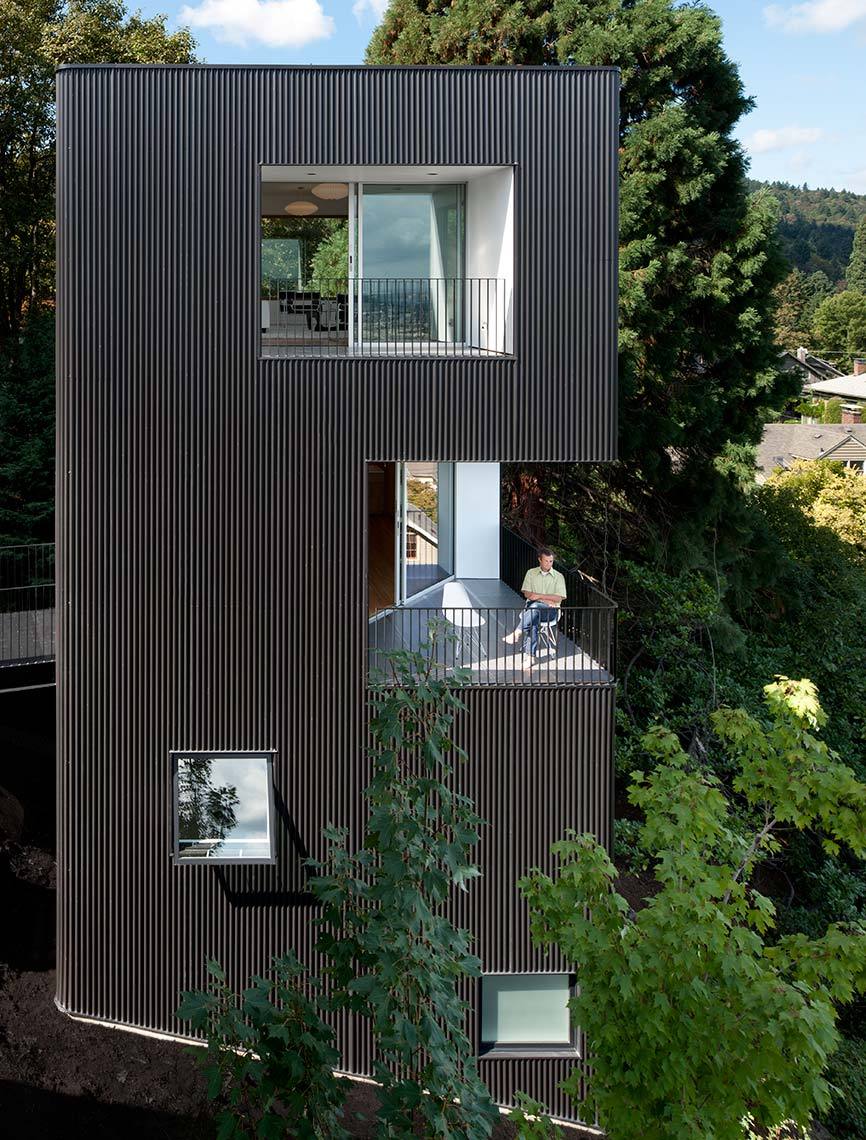 Due to the Tower House being built on a hill, access is provided by a lightweight steel pedestrian bridge. The bridge leads into the mid-level of the home, which contains the kitchen and dining room. 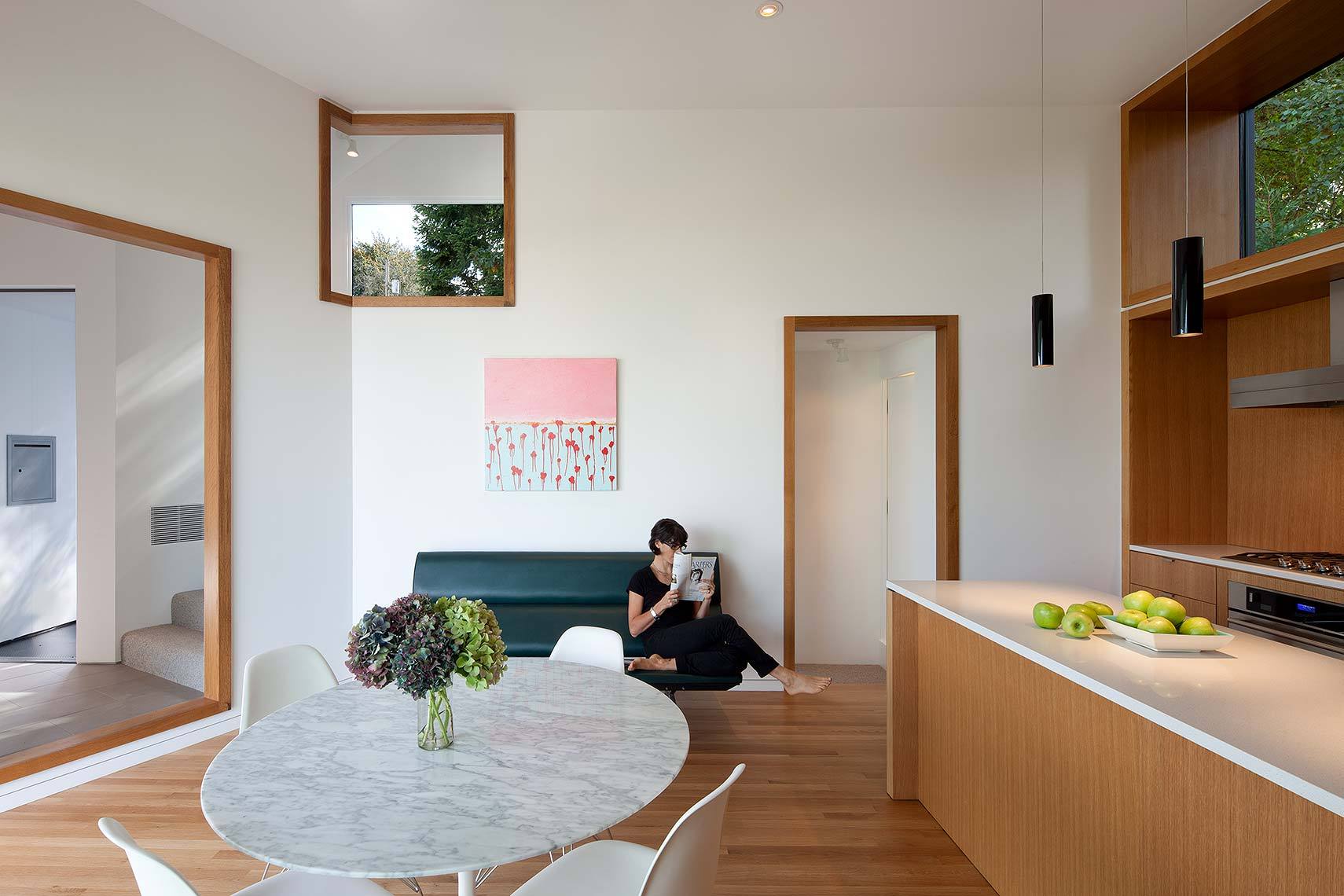 The upward side of the house is surrounded by Douglas fir and pine trees providing shelter and privacy. The downward side of the home features amazing panoramic views of the city below and the mountains in the distance. 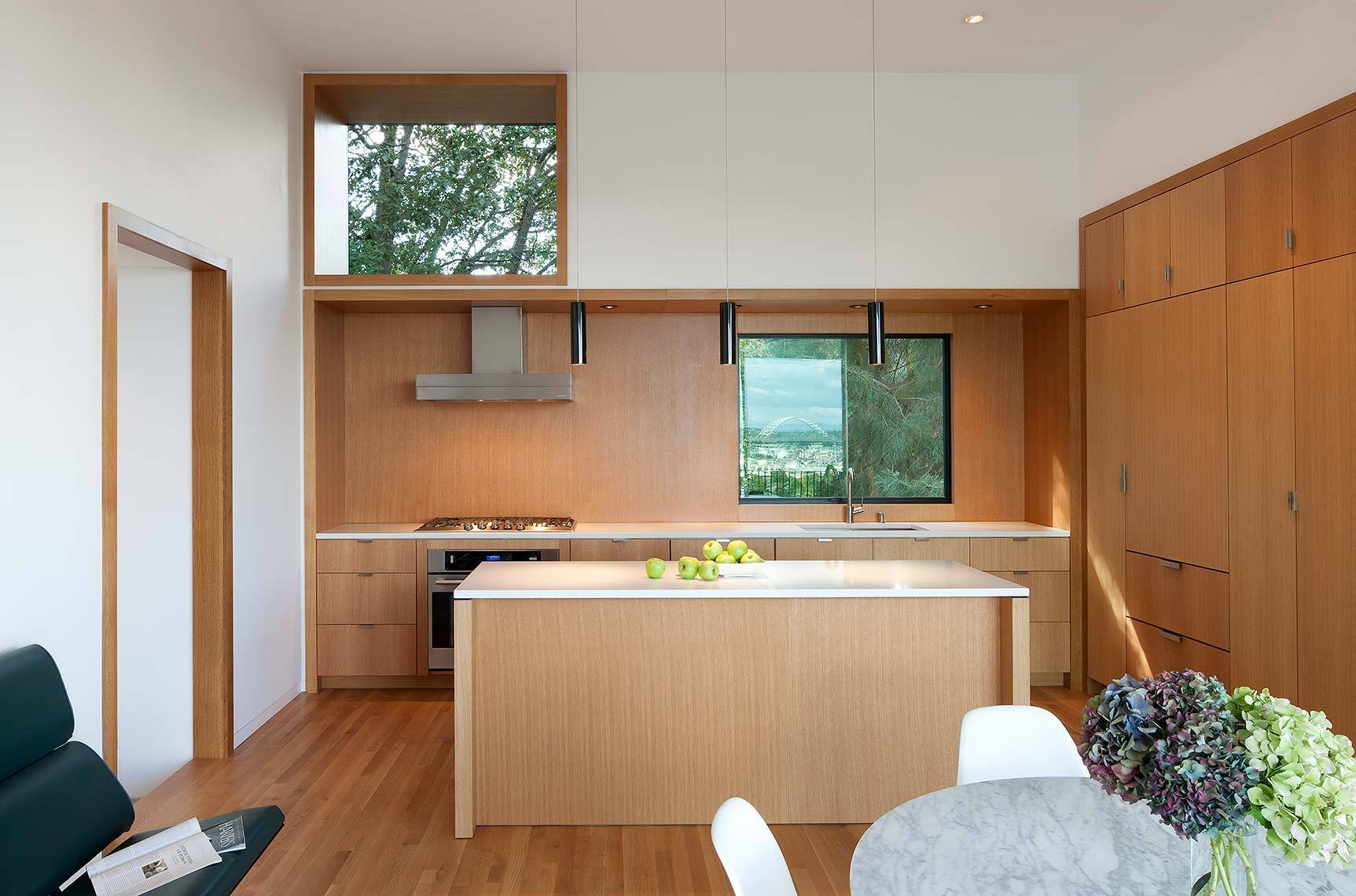 The house is designed like a medieval tower – each floor contains on primary room with supporting spaces built into the building’s perimeter. The house has three main rooms, the living room, dining room (includes the kitchen), and bedroom, that are enclosed in the building’s “skin” or “sleeve” as the architects refer to it. 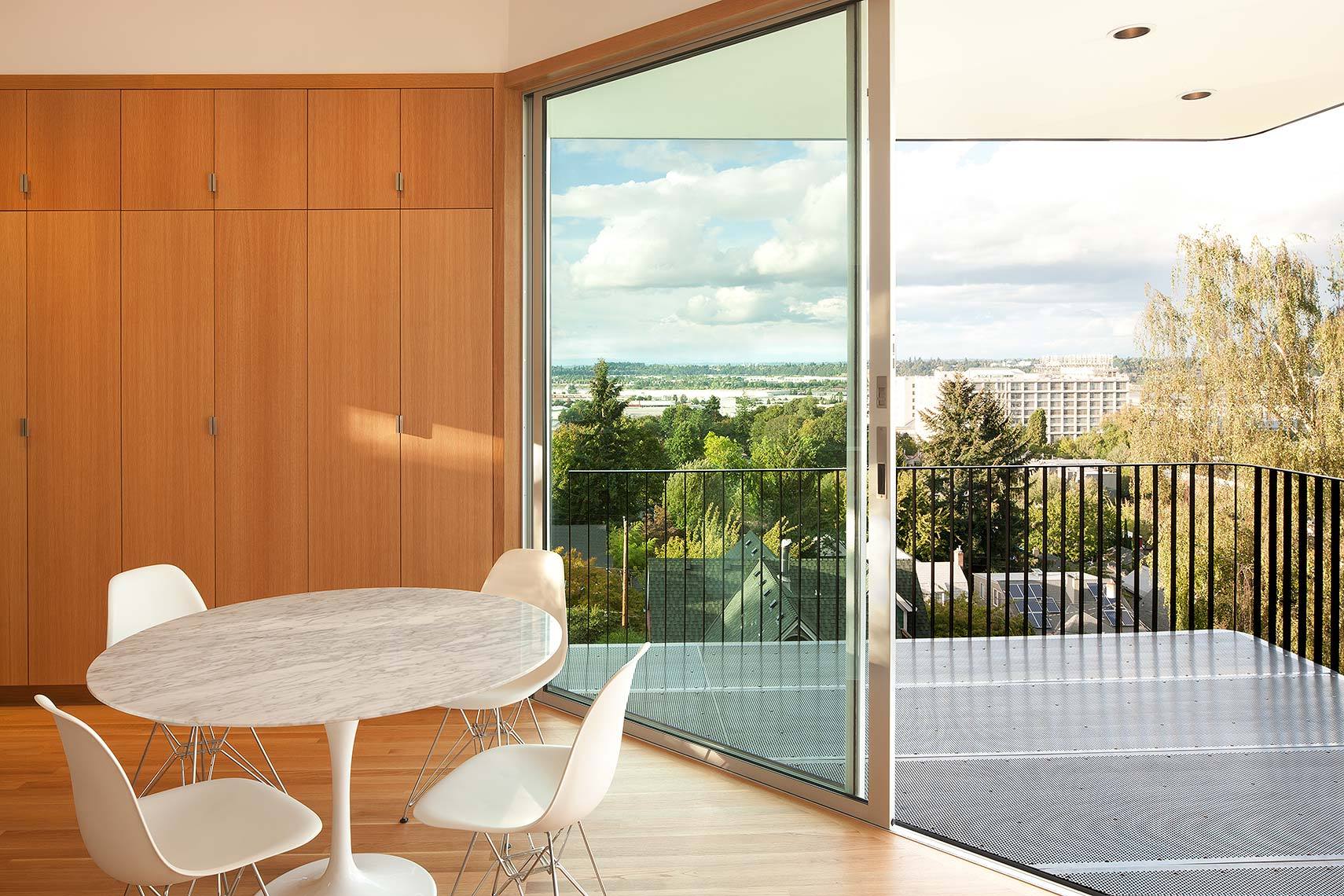 The three main rooms of the Tower House are the dominant spaces within the home. They are all large open spaces with tall ceilings, and finished with white oak. There is a simplicity to each of the spaces with a minimalist vibe. The white oak is used to create a threshold between the interior and exterior of the room, which, according to the architects, “heighten[s] ones sense of being held and contained”. 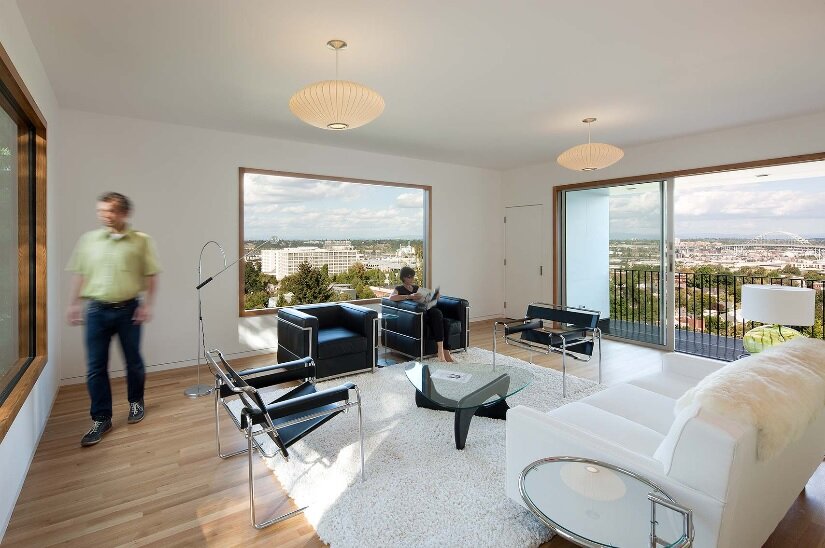 The staircase, bathrooms and storage closets envelope the main interior spaces, allowing the space to take on a cellular structure. The staircase has both interior and exterior openings that are offset from one another, introducing soft, ambient light in the main rooms. 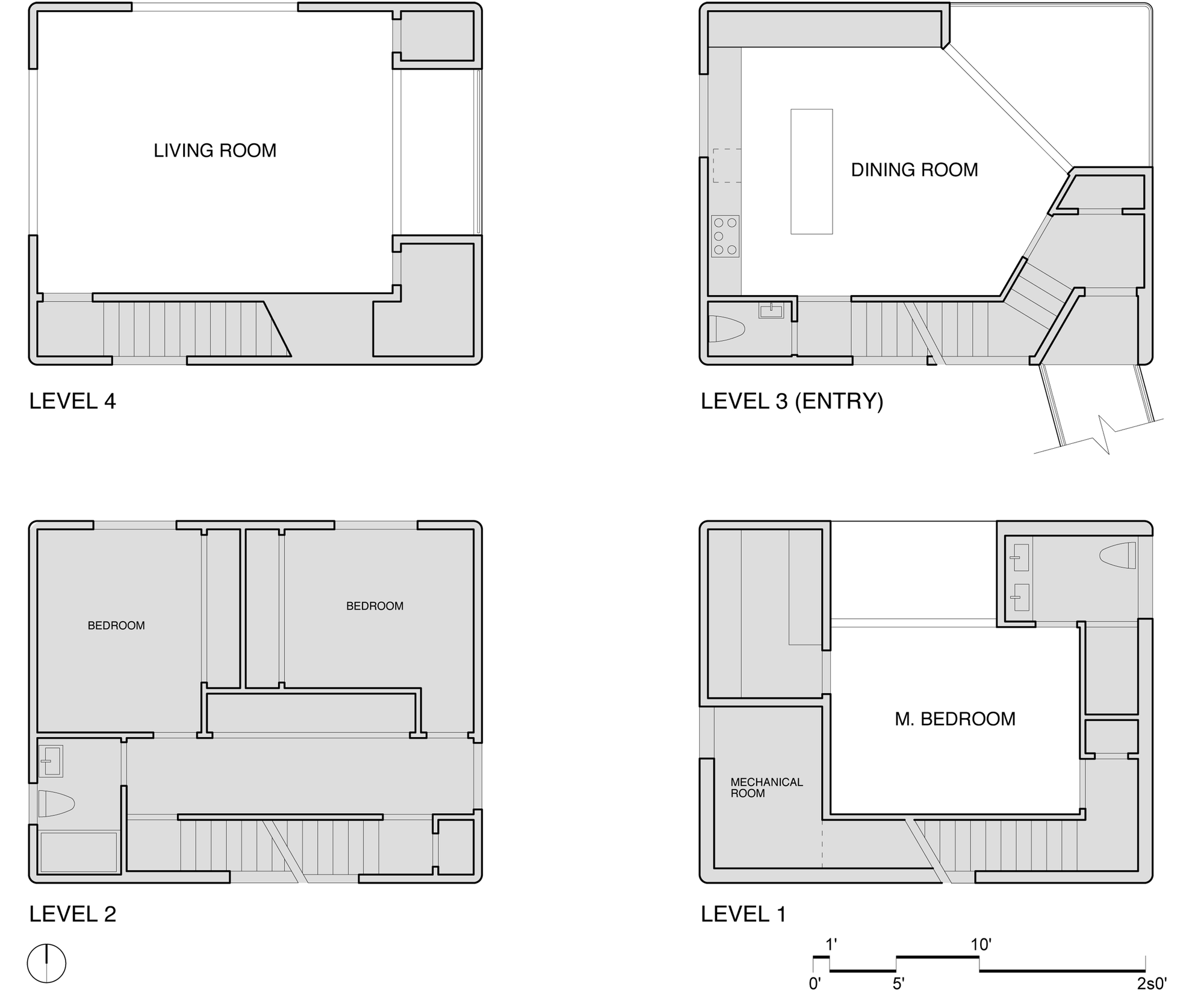 On the outside the building is clad with vertical black corrugated steel. The corrugated sheets have rounded corners to eliminate the need to install corner trim on the building’s edges. The cladding was visualized by the architects as a continuous sleeve that is only punctured by the window and door openings.

For more small houses check out this modern Swedish family home that been designed with simplicity and necessity in mind. Or this small house in Nova Scotia that extends over a cliff.

Woody35 is a Modest Norwegian Cabin by Marianne Borge