Over the course of the last two years I’ve designed quite a few tiny houses, and produced several tiny house plans both for myself and for other people. A number of these houses will never see the light of day for various reasons. Some are too complicated or idiosyncratic, others I don’t like well enough, and some contain ideas that I’m not quite ready to release.

However, I recently received an email from a regular visitor asking if I could share some of the “unpublished works”. So I’ve pulled four tiny houses out of the archives and provided a bit of an overview as to how I go about designing a house. Perhaps they’ll provide you with some inspiration for your own tiny house.

My tiny house plans start off as sketches (scribbles)

The majority of tiny houses I’ve designed start off as sketches. I have a little A5 notebook that acts as a stepping stone between preliminary concept to final design (there are several other stepping stones, but I’ll save that for another time). My aim at with the sketch is to get a general idea of the space available and to test a variety of floor plans within it. I also usually sketch an outline of the exterior appearance – the elevations. (This helps when trying to determine a suitable layout for fenestration.)

The picture below shows a very early sketch (scribbles) of the Athru tiny house. The drawing probably took less than 60 seconds but it helps to give an overall impression of the space and how its used.

Notice that in the final version of this tiny house both the bathroom and the entry door have been moved to the opposite end of the home. This allowed me to capitalize on the kitchen, improve the structural efficiency and create a tiny space that’s much more functional. The Athru tiny house plans are currently on sale – you can save over $100 with this coupon code: tinyhouseplans25

Once I complete the preliminary sketch of the tiny house (and if I like it), I produce a scaled version of the home. This step allows me to see if the home is feasible in terms of the restraints placed on tiny houses on wheels (the maximum width, height, weight etc). Sometimes it becomes evident that, say, the roof pitch will need to be adjusted to make the home “road legal”. The impact of these changes needs to be taken into account in terms of the overall design.

The image below features a sketch of a Victoria-styled tiny house. However, when I produced the scaled model it became obvious that I wouldn’t be able to strictly stick with the Victorian era features. The porch, roof, and dormers all needed to be modified to make the home suitable. Unfortunately any modification of these elements leads to a revision of the structure – it’s a two steps forward, one step back process.

The picture below shows a revised model for the Victorian-style tiny house. At this point in the development, I’m thinking about the structure and how to make it as efficient as possible. Quite often you’ll find you might have to compromise an aspect of the homes structural efficiency (not the same as structural integrity!), because of an interior element – the location of the kitchen sink, alignment of windows etc.

In some cases, this ‘compromising’ of the framing enhances the home. For example, in the McG Loft and the McG Loft V2, the inclusion of a staircase lead to some unique structural features that boosted the character of the tiny house.

If you’ve been following Humble Homes for a while, you probably know that I used to offer a custom tiny house plans service. Things have since changed (I just don’t have the time) but the picture below shows the very last custom tiny house I designed.

The house is 24′ long and features a generous living area heated by a wood burner, a kitchen, bathroom and studio. The couple that asked me to undertake the design are both artists – one’s a musician, and the other is a fashion designer. The studio space allows them to carry out the artistic endeavours in a separate space from the main living quarters. This home also features the largest sleeping loft out of any of the homes I’ve designed. My favourite feature is the fold-up porch.

Tiny houses that aren’t quite ready for the world yet

The number of tiny house plans that actually make it on to Humble Homes is relatively small. However there are some that may be featured in the future. I said at the start of this post that some of the tiny houses I’ve designed feature ideas that I’m not quite ready to release. These ideas, or concepts, are mostly related to the use of transformable spaces – like the Athru.

These transformable concept homes need further development and refinement, but again, I’ve only got so much time available and I’ve set this series of homes to the side. Permanently postponed.

The tiny house above belongs to the ‘transformable’ series, although it’s not immediately obvious from the exterior. The interior features dynamic elements that allow the user to adjust the living space according to their needs. No floor plan Niall? What a teaser.

This isn’t really a tiny house in the strictest sense, more of a camper, or single-person caravan than anything, but it is interesting so I’ve included it.

After reading about Kevin Cyr’s Camper Bike – a sculptural art piece (original post here) – I was inspired to take the idea further and see if it would be possible to create a lightweight structure that could act as a real life ‘camper bike’. 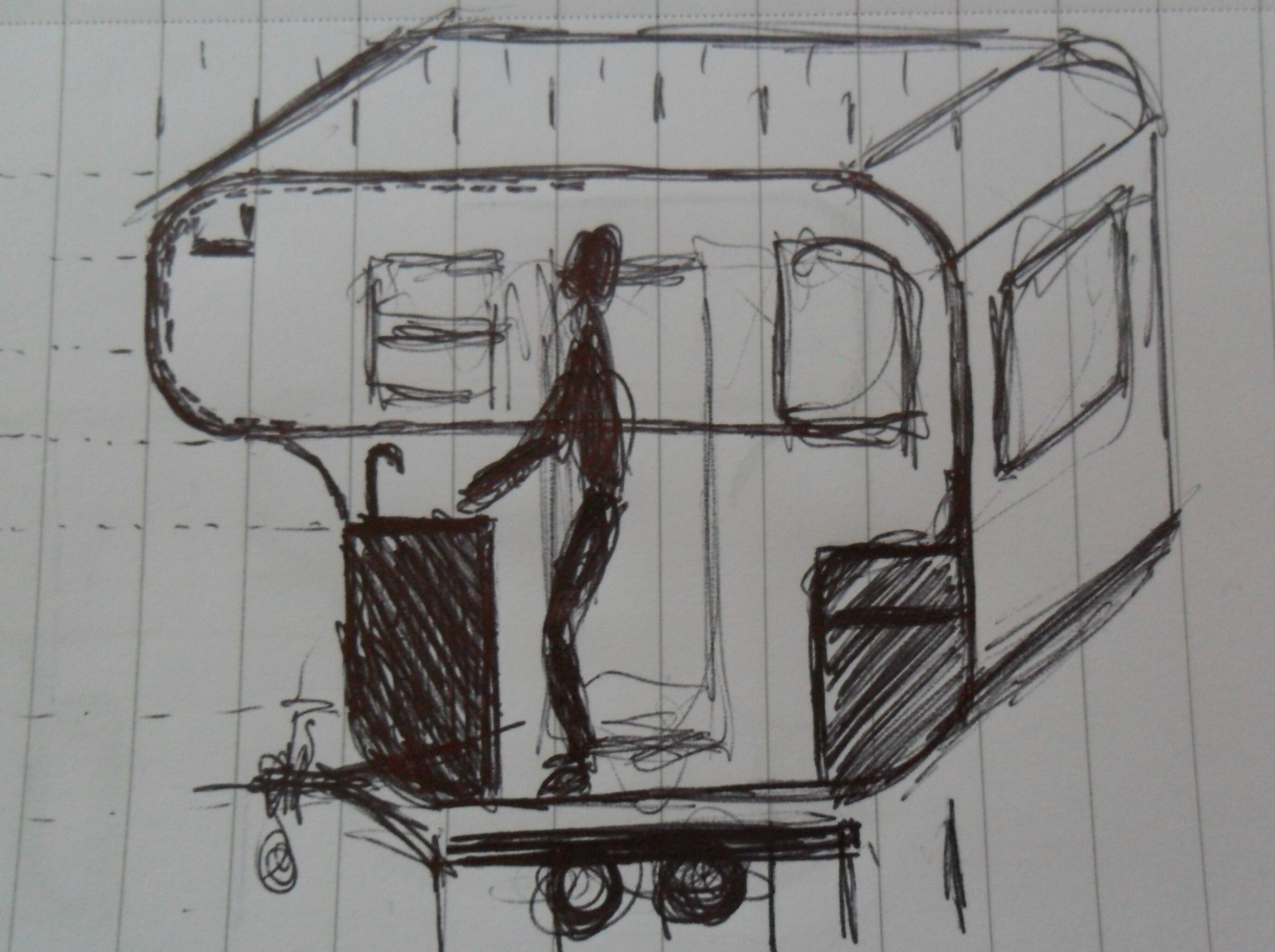 So I set to work developing my own version of Kevin’s idea. I eventually came up with a design that met the initial requirements; a super small, super lightweight, single-person dwelling. The camper contains a sink, cook-top, seating/storage unit, dining table, and a sleeping area. The slats shown in the picture below act as the support for the bed. When it’s bedtime you slide the slats around to form the sleeping space. As a bonus, when the bed isn’t in use it can act as a privacy shade for the rear window.

I didn’t bother to develop a set of plans for the camper for a few reasons, but mainly because it’s a pretty complicated little structure.

What I’m currently working on

I’ve retired from working on tiny houses on wheels for a while. I’ve gone off in a different direction recently and have been developing a super-insulated modular structure that’s designed for permanent foundations, and with some minor changes it could act as a passive house.

The MPod, as I’m calling it, can be stacked and joined together like Lego’s. You’ll be able to create a two-storey house, or a single retreat. It’s quite a flexible little space and I’m hoping to release an update on it before the end of the month. Stay tuned!

[Note: I pretty much never proof read my posts (bad habit I know) and considering this is the longest post I’ve ever written, it’s probably full of of grammatical errors and spelling mistakes. Feel free to point them out to me!]

Micro-Housing for Students by Tengbom Architects