Perhaps this trailer is the next stage in the evolution of the once humble camper. Dubbed the Urban Escape Vehicle, or UEV for short, and designed by the Australian company Conqueror, this travel trailer sets out to meet all your needs while on the road (or off-road) in one relatively small package. 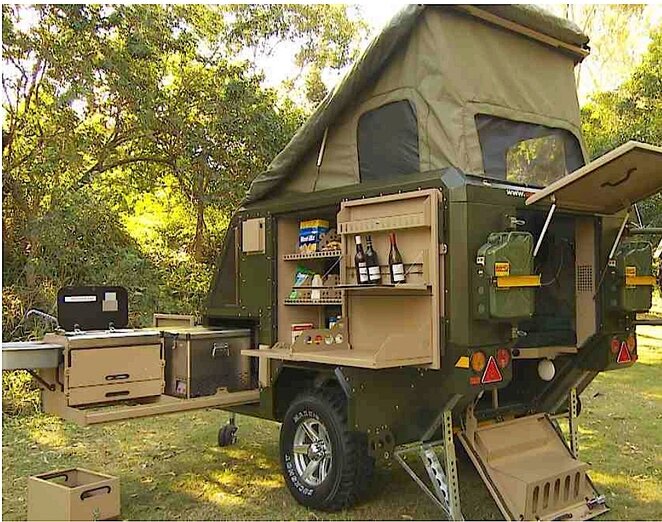 The trailers full name is the UEV440, and it features more pop-ups and pull-outs than a Swiss Army Knife, from wine glasses to a stove, and a flat-screen TV. Conqueror, the company which produces these all-terrain campers, has spent the last two decades refining and developing the series to make them among the most rugged and versatile campers on the market.

The UEV440 is designed to provide its users almost all the facilities of a modern home – as it turns out, you can go camping with everything including the kitchen sink. The camper has a two-burner stove, a double sink, kitchen storage compartments, a hot water system, interior heating and air-conditioning, a microwave, shower, fridge and a DVD player for its flat-screen TV. 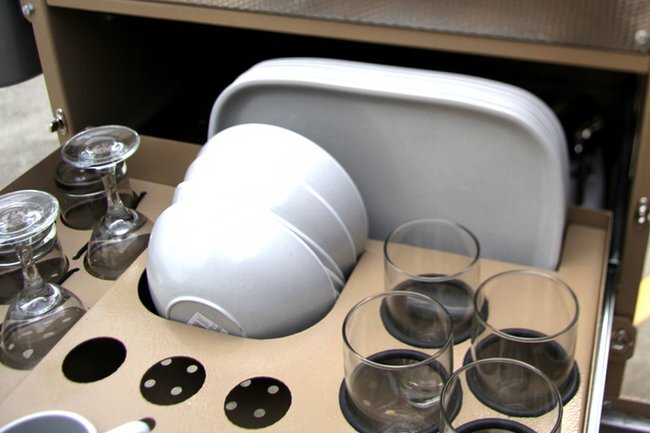 When using the UEV you don’t have to worry about finding a suitable flat surface for sleeping – the main sleeping space is located within the main chassis of the trailer and a pop-up roof ensures that there’s plenty of headroom. Tarps and insect screens help to keep out the rain and bugs, and the interior is pressurised to prevent the build-up of dust.

Each unit can be customised to the owner’s needs, which is great because this thing will set you back around $62,700 US. Don’t worry; for the rest of us there’s still the humble tent.

For more on campers check out the GO Pop Up camper which is essentially a less luxurious, and hence much cheaper version of the UEV440. Or this award winning camper called “The Awning” that was produced by the Dutchman, Eduard Bohtlingk. See all camping.