Berlin-based architects Spamroom and John Paul Coss recently undertook the redesign of this micro-apartment set in the German capital. The apartment dates back to the early 1900’s and has a floor plan of just 226 square foot (21 square meters). 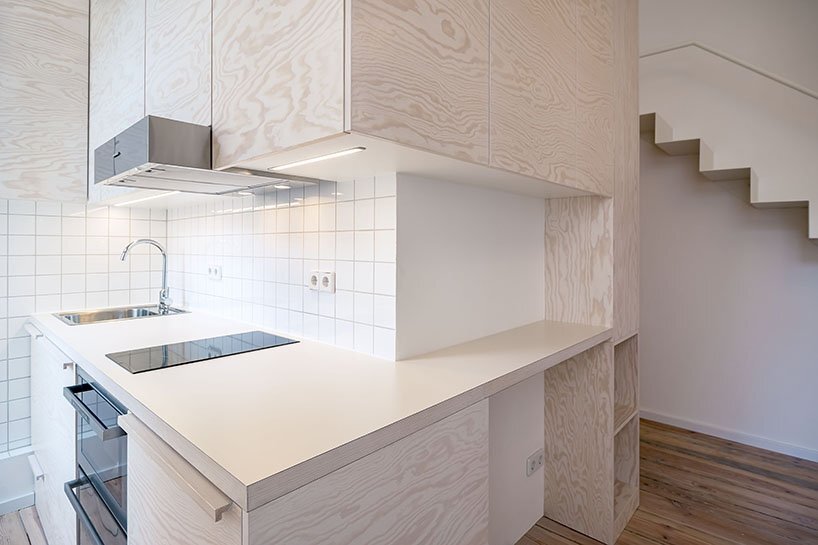 The original layout was divided up between two main living areas – the kitchen and bedroom – and a small bathroom. The bathroom was an addition to the apartment; originally occupants had to use a shared toilet in an auxiliary area found downstairs. The bathroom may have been a convenient addition, but according to the architects, it threw the room proportions off more-so than they already were. 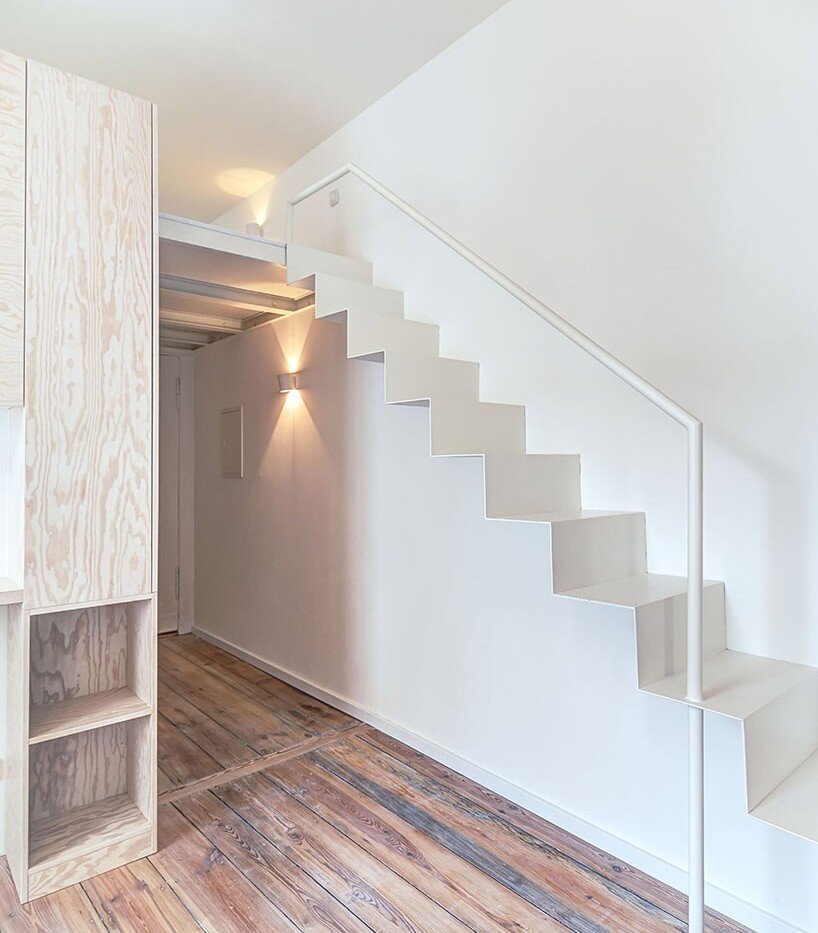 In the end Spamroom decided they needed to gut the apartment entirely so as to introduce a feasible floor plan. The floorboards were pulled up and restored, and the ceiling torn down and replaced, and partition walls were removed. With the apartment now a blank canvas, they were able to start fitting out the space. 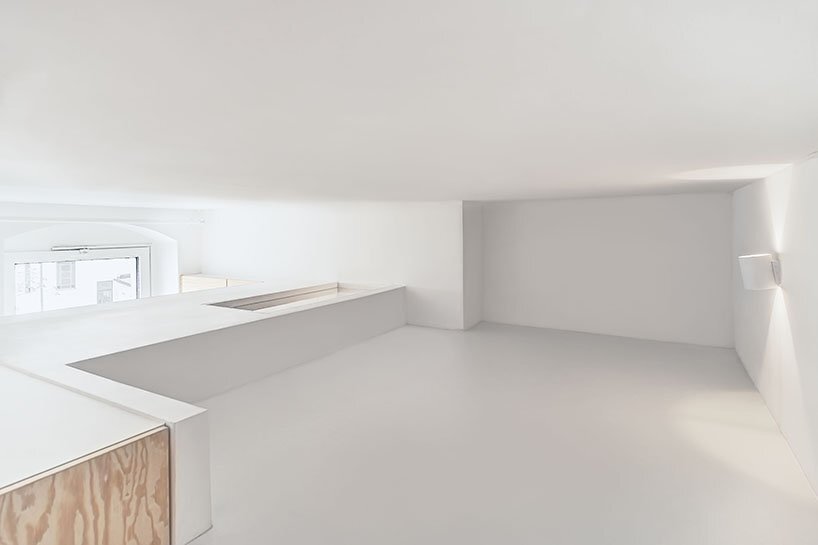 To make best use of the space they introduced a small mezzanine that serves as a sleeping and storage space, freeing up the living area below. A narrow folded steel staircase provides access to the upper level, and it’s width prevents it from intruding too much into the living room. 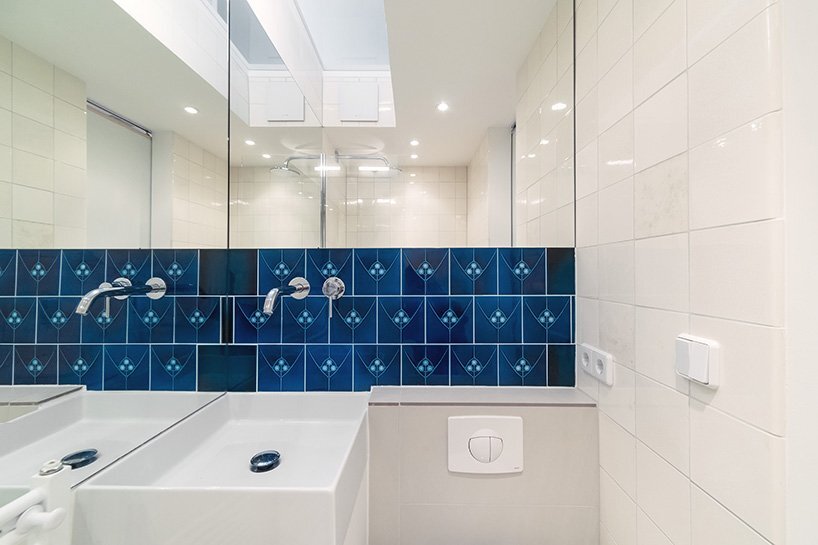 The bathroom is 21.5 square foot (2 square meters) in size and is set between the structural supports for the loft above. The kitchen then wraps around the bathroom forming an L-shape. The remainder of the apartment is mostly dedicated to the living room, but it also contains a concealed ventilation system, storage and an entry hallway. 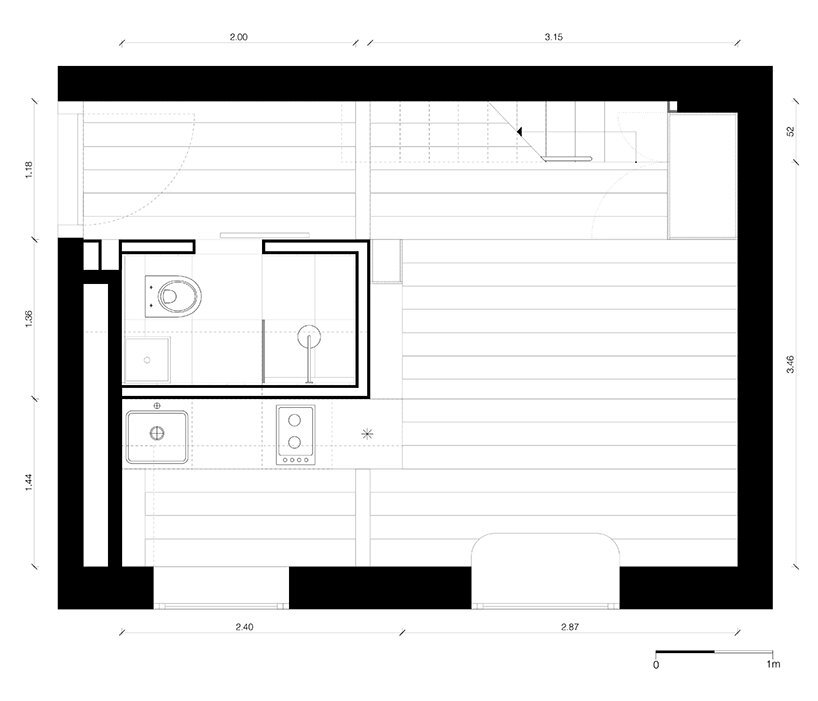 The kitchen, while compact, does feature all the main appliances you’d expect to find in a modern home (cooktop, oven, sink, refrigerator, and storage). One of the window sills has also been extended to create a desk overlooking the courtyard below. The high ceilings, large windows and mostly white finish, all help to prevent the apartment from feeling claustrophobic.

For more small apartments check out this other renovation from Paris by Richard Gilbault. Or, this micro-apartment that features a wooden nest-like loft. See all apartments.

A Tiny House in Haringey by Satish Jassal Architects

An Old Apartment Block Renovation in Portugal by A2OFFICE